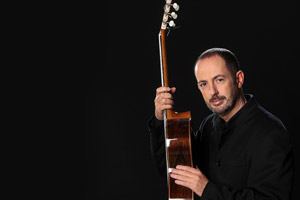 Born in 1960 in Barcelona, where he also studied guitar, Xavier Coll went on to specialise in historic string instruments. His three major professional interests are concerts, recording and teaching.
His solo performances in Spain, France, Italy, the United Kingdom, Switzerland, Russia, the Czech Republic, the United States, Central and South America, and Egypt have always been received with great critical acclaim. In the past he has worked with Le Concert des Nation directed by Jordi Savall and can currently be heard at the Maestros de la Guitarra Española festival, where he will be playing 50 concerts.
He has released two solo CDs: Encuentro (Tárrega, Albéniz) and Tres siglos (from the Renaissance to Romanticism, playing on the vihuela, and baroque and romantic guitars), six CDs with the flautist Montserrat Gascón and one with the mezzo soprano Margarida Lladó. He also featured on EMI’s recording of the complete works of Joaquin Rodrigo.
In 2003 he became a professor at the Escola Superior de Música de Catalunya (ESMUC).
He has been awarded many prizes at international competitions, receiving praise for his sophisticated technique, musical purism and, above all, for his ability to touch the emotions of his audience with his interpretations.