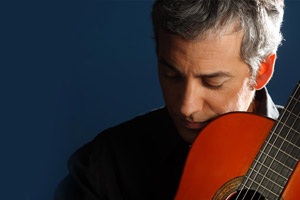 Pedro Javier González from Barcelona is a master of a unique musical language, capable of performing both traditional and contemporary music.
His qualities as a guitarist were showcased in historical pop recordings from the 1980s and 90s. Manuel Garcia, Joan Manuel Serrat and the group D’Callaos also appreciate Gonzalez’ skills as an arranger, producer and musical director.

He has recorded six albums and a live DVD at the Olympic Theatre in the Italian city of Vicenza. His most recent album Verdades ocultas y medias mentiras (hidden truths and half-lies) was released in spring 2007 and is a collection of original themes and a version of la leyenda del tiempo (The Legend of Time) featuring guests such as Olvido Lanza.

His current repertoire as a solo flamenco guitarist focuses upon folk tunes, his own compositions and works by other composers.