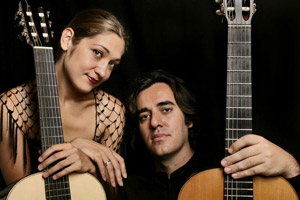 Barcelona Guitar Duo made its highly praised by the critique and the audience debut in the prestigious Palau de la Música Catalana, one of the most beautiful concert halls in the world by performing Concierto Madrigal for two guitars and orchestra by Joaquín Rodrigo in 2001.

Today Barcelona Guitar Duo is considered as one of the best Spanish Guitar Duos defined by the critique as: "one of the big virtuosi of the 21st Century" (Televisión Nacional de Cataluña) and recognized for their "...fully achieved technical control and an evident finesse, precision and purity in the sound production"  (Diaro de Mallorca).