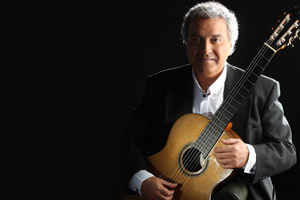 This master of the Spanish guitar was born in Barcelona and has won worldwide recognition and critical acclaim for his musical achievements.

With his innate talent, he brings the audience to an awed silence as soon as he plucks the first string.
His most outstanding performances include concerts at the Lincoln Center in New York, the Teatro Real in Madrid and, in particular, the hommages to Joaquín Rodrigo. One of these took place in 1991 at the United Nations in New York, the other at the Palau de la Música Catalana in Barcelona on the occasion of the centenary of the composer's birth.

His many concert tours have taken him to a host of European countries and to the United States of America, where his concerts were of particular note.  He has performed at some of the most prestigious international festivals, cycles and venues in the world, including the American Landmark Festival, the Rosa Sabater Memorial, El Grec, the Festival Internacional Viña del Mar (Chile), the United Nations (Vienna and New York), the Sociedad Guitarrística Española, the Philadelphia Classical Guitar Society, Fundaciones (Juan March, Jacinto Guerrero, Caja de Madrid, La Caixa), the Frick Collection Museum (New York), the Spanish Institute (New York) and the International Monetary Center Festival (Washington) to name just a few.

He also frequently performs as a soloist with orchestras which include the Freiburg Kammer Orchester, the Philadelphia Chamber Orchestra, Filarmónica W.A. Mozart, European Symphonic Orchestra, Prague Chamber Orchestra, Sinfónica de Moldova and the Orquesta Internacional from Barcelona, of which he was the founder and sometime artistic director.